Can you beat the blight? 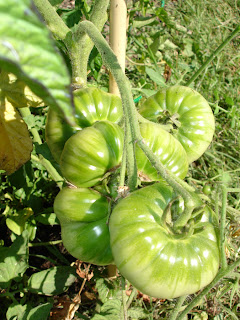 The tomato plants look gorgeous at this time of year. Green, sturdy, in flower with the first truss just setting. It's always hard to imagine in June that in a few short weeks these lovely healthy plants could be a mass of sooty rotting foliage, as the blight hits.

This year, with the cool, rainy, windy weather battering our gardens, there have been reports of blight already. The RHS reported some early confirmed cases of early tomato blight on its Facebook page on June 14th, and then last week it came closer to home, with two gardening friends of mine in London reporting blight on their tomato plants.

That might seem just unlucky, except that in this particular case I discovered that the affected plants had been bought from the same nursery. And that in one case, these blighted tomatoes had been planted out next to tomato plants raised from seed and that the home-reared plants were still healthy.

I can think of no better argument for knowing the provenance of your plants and, wherever possible, starting from seed. You can control the growing medium, the environment, the feeding, the watering ...
In the case of tomatoes, the arrival of blight in the UK is a case of 'when', not 'if' and even with the best of care, I reckon outdoor grown tomatoes in Britain will get blight sooner or later. But the middle of June is a bit too early to have to consign one's tomato plants to the incinerator.


Since I started growing tomatoes outdoors 15 years ago, there has been roughly one year in five where the plants have either escaped blight or it has arrived late enough to enable us to harvest a proper crop beforehand. 2002 was a blight-free year, as was 2006. (It's not that I keep meticulous records, but I remember these years particularly: 2002 was the first year I had my allotment and the tomatoes were about the only crop I had time to plant out and grow successfully; in 2006 we were staying with friends and bringing home bowlfuls of tomatoes every day. "I never knew growing tomatoes was so easy," they would say. "It isn't, usually," I would mutter back.)

Tomato blight has always seemed to be unavoidable. And once you've got it, you've got it. However, this year and especially when I was researching tomatoes for the Secret Garden Club workshop on Mediterranean vegetables back in April, I've thought a lot more about how one might increase the chances of avoiding blight in the first place.

1. Grow early varieties, like Red Alert. They should start fruiting before the end of June, even grown outside (disclaimer: not this year, we have a few immature fruits the size of olives so far); normally you wouldn't expect blight until July so you would hope for a month's worth of cropping.

2. Grow as far away as possible from other tomatoes. If you have any sort of choice.

3. Grow in fresh soil. This is where I suspect the problems lie with the garden centre that my neighbours shopped at - as described above. Growing in fresh compost is essential, and I think, unwillingly, growing in pots or growbags rather than the open ground is desirable. And if you use pots, these should be thoroughly cleaned and rinsed before filling for the tomatoes. Greenhouse tomatoes tend to fare better than those grown outdoors, although I'm reluctant to give up outdoor tomatoes altogether. (I don't have the indoor space, for one thing.)

4. Don't be so keen to pinch out those side shoots. If you grow cordon-style tomatoes, such as Sungold, Ailsa Craig, Tigerella, the advice is always to pinch out the shoots that grow between the main stem and the leaf stems. Leave them in, they say, and the plant will become wildly bushy and grow a mass of leaf at the expense of fruit. Over the years though I've come to think that maybe the over-enthusiastic pruning of side shoots is unhelpful. Every cut creates a wound; every wound is an opening into which blight can penetrate. My most blight-resistant tomato ever was Broad Ripple Yellow Currant, a bush variety which tumbled about all over the place, but which never succumbed to blight. Last year I semi-forgot about trimming a Marmande (semi-indeterminate, or not-quite-cordon) in the greenhouse and while everything around it eventually turned black and crumbled, the Marmande soldiered on. I'm sure it would have produced more fruit if I had pinched, and pruned, but we were still picking tomatoes off the plant in early December. (Although a Marmande that ripens in November tastes nothing like a Marmande that ripens in August.) I can't find any references that suggest bush or untrimmed varieties are more blight-resistant; this is anecdotal evidence only.

5. Try grafted tomatoes, or even better, graft your own. This is my secret weapon in the battle against tomato blight. The idea is that you take the top of one tomato variety and graft it to the root and stem of another - with tomatoes you would choose a 'top', or scion to give it its proper name, which would give you lots of delicious fruit, and a root and stem, or 'rootstock', which is known to be disease resistant. The rootstock confers this resistance to the scion, which continues to produce its delicious fruit as before. In other words, you get the best of both worlds.

Fruit growers have been grafting for decades, although more usually in their case, the rootstock is chosen to control the size of the mature tree. This is how you are able to grow apple or pear trees, say, which never grow taller than 8-9ft and yet are laden with fruit. The apple or pear tree 'top' has been grafted on to the rootstock of a much smaller tree (often in the case of apples and pears, a quince rootstock, as it happens).

Tomato grafting is fiddly rather than difficult. We showed Secret Garden Club attendees back in April how to graft tomatoes - detailed photos and instructions are here - and the initial results are looking good. I'm already planning to graft more tomatoes next year to give them more of a chance to beat the blight. 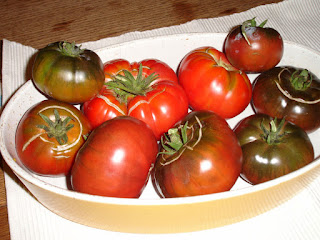 Any more blight-beating tips would be most welcome - I suspect a combination of tactics is the strategy that will work best. 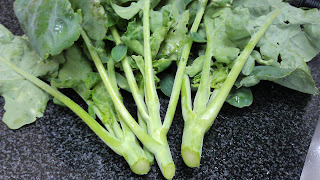 The trouble with radishes

Why does growing radishes give me so much trouble? Children grow radishes, for heaven's sake. They're the sort of crop you just drop in the ground to pop up quickly while everything else takes its time. Radishes are known as an catch crop or a marker crop, the latter especially with parsnips which can be slow and erratic. The faster-growing row of radishes 'marks' the row of parsnips, helps to keep it weed-free and - in theory - provides a quick harvest while the parsnips are still pondering germination.

And yet they give me endless trouble. They don't like my clay soil for a start and would prefer something more sandy and freer-draining. Their leaves are pockmarked by flea beetle: by the time I harvest the effect is like delicate lacework. The slightest check in growth and off they bolt, leaving a thick stem with a woody  stub of a radish at the end of it. Last month's spell of fine dry weather following the record-breaking wet April is a good case in point and I'm writing this after coming in from lifting a good three quarters of the first radish sowing - all bolted.


I usually make three radish sowings: in March in a sheltered raised bed. I get to March and I long to be able to put something in the ground and radishes seem to fit the bill. The second sowing in April are the parsnip marker rows. Hearteningly, this year's April sowing is shaping up quite well, especially welcome after losing so many of the first lot. The third set, in May, is always totally hit and miss. Mostly miss.

And yet I will persevere with radishes. Partly because, yes, they are quick to mature. If they're going to fail, they fail quickly and I don't feel I have invested too much time and space and hope on them. And partly because the ones that do slip through the net are well worth it. Home-grown radishes have a much stronger, more well-rounded flavour making shop-bought ones bland in comparison. They're so attractive on the plate - I always get a delicious sense of anticipation from a dish of ruby and crimson radishes. I've tried white varieties such as Ping Pong and the Polish yellow radish Zlata without much success: alongside the standard French Breakfast, I would rate Scarlet Globe and Amethyst the highest, although Amethyst is a bit of a bolter. All these three have a strong clean flavour, plenty of crunch and that all-important peppery kick to the taste.

Posted by Christina at 21:56 No comments: