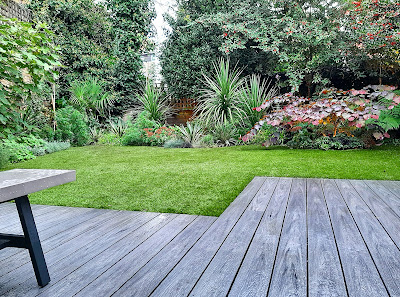 The owners of this town garden in south London wanted a lush visual vista all the year round. They freely admitted that at present they didn’t spend much time in the garden and hoped that the installation of a large deck would make relaxing in the open air more enticing. They also requested artificial turf for its looks and zero maintenance.

The new deck was built using Saige composite boards and given the size of the lawn we suggested the clients should look at a high end product for an artificial turf that would stay looking good for as long as possible, selecting Easigrass’s Mayfair brand.
The new planting centred on a number of focal points including a handsome Cersis canadensis (Forest Pansy) with its mahogany-purple leaves in autumn and bright mauve blossom in the spring, and the Cordyline australis, a firm favourite plant with the clients. The existing fig tree which threatened to dominate the whole of the left hand side of the garden was hard-pruned and thinned to create a much more open, structural shape and a fern garden at the back on the right hand side made the most of a dark, shady area. 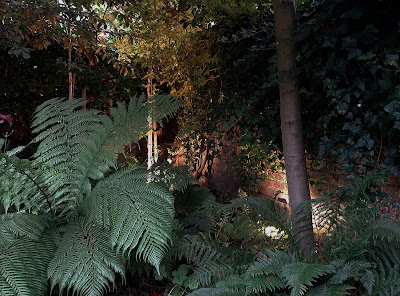 Spotlights were installed to pick out the shapes and forms of the shrubs and small trees and make the garden visually welcoming at night.
A simple timed irrigation system ensures that the clients don’t have to worry about watering and they are happy to report that they now eat out, enjoy early evening drinks and have spent more time in the garden in the last year than in the whole of the preceding decade.
Alek and his team at Alek Nikolic Landscape Contractors did a great job building the deck and other hard landscaping in the garden. Easigrass installed the lawn. Armadillo Electrics installed the beautiful garden lighting.