We had our first frost of the autumn this week so everything needs to be safely gathered in rather earlier than usual this year. I still have two rows of pink fir apple potatoes in the ground, the chillies are still ripening and the large white beans - the fabes de granja, which are very late this year anyway – won’t make it to maturity before it gets too cold, I think.
So the kitchen is looking rather full at the moment. Pumpkins and squashes curing on the sunniest shelf; the last of the tomatoes stubbornly remaining green on a wide plate in the window, a big bowl of quinces, a netted bag of borlotti beans drying out and strings of shallots and garlic from earlier in the summer. And I’m still working my way through the apples.
We are two jellies down and one to go. The apple and rosewater jelly has a beautiful floral fragrance and is a shimmery pale gold in colour. I was surprised how little rosewater was needed to lift the jelly – just two teaspoonfuls to 2l of apple juice.

Apple and rosewater jelly
First make the apple juice:
5-6lb cooking apples
300ml apple vinegar or cider vinegar
250ml lemon juice (that’s six lemons, the way I squeeze them)
1.2l water
Wash/rinse the apples. Put the vinegar and lemon juice in a very large pan. Roughly chop the apples and add them to the juice. Don’t peel or core them, but do remove any stalk and bad bits.
Add the water and bring to the boil. Turn the heat down and simmer for about 45 minutes until the apples are very mushy.
While the apples are simmering, rig up your jelly bag. I used to tie jelly bags up with string and suspend them from cupboard doors, until we refurbished the kitchen and I found that none of the cupboard door handles are high enough – there isn’t enough clearance between the handle and the worktop to suspend a jelly bag with a bowl underneath.
I’ve resorted to the time-honoured method of upending one kitchen chair on another. The bowl to catch the juice sits in the (inverted) seat of the chair, then I tie a big  metal colander by its handles to each upside-down chair leg, so that the colander hangs high over the bowl. The jelly bag sits in the colander – in fact, it’s not really a jellybag, just a very large piece of butter muslin, draped over the sides of the colander.
Ladle the appley mush and all its liquor into the butter muslin and leave to drip overnight. Don’t be tempted to help it along by stirring it or pushing at it  - this will make the resulting jelly cloudy, so just let it drip.
Next day:
Get some jars together and sterilise them by washing in very hot soapy water, rinsing in very hot water and then drying/warming them, on their sides in an oven heated to 120 degrees. They can sit happily in the oven while you get on with the rest of the jelly, I find it impossible to estimate at this stage how many jars I need, so I always wash and sterilise what looks to me like far too much.
Measure out how much juice you have, and pour into a very large pan. Then (this is so much easier in imperial measurement), for every pint of apple juice in the pan, add 1lb sugar. Next add 2 teaspons of rosewater. Heat the juice and sugar slowly at first, stirring until the sugar dissolves. Taste the juice and add a little more rosewater if you think the taste is very faint. Once happy with that, raise the heat to bring it to the boil. Once boiling, boil hard.
Apple juice doesn’t take long to set. Start testing after five minutes, then every 2-3 minutes after that. Spoon out 2 teaspoonsful of juice from the pan on to a saucer. Leave for a minute or so to cool a bit, then push a forefinger through the middle of the juice puddle. When the mixture wrinkle as you push the finger through, and the juice won’t flow back to meet in the middle again in your finger’s slipstream, you have reached a set. Turn off heat and skim the surface of the jelly. Retrieve the warmed jars and ladle the jelly into them – I use a strainer as well if there still some floating bits in the jelly. Seal the jars and leave to cool.
Apple jelly with a hint of mint also works. I wanted to keep the mint reasonably subtle rather than producing a green sludge, and also
But, you know what? It’s prettier, and the flavour isn’t overpowering. I think I might prefer it.
Apple jelly with a hint of mint
Apple juice as above
Sugar, as above
A large handful, maybe two large handfuls, of mint.
Remove the stalks from the mint and chop finely. Make the apple juice and jelly as above (though minus the rosewater, obviously) and when it reaches setting point, turn off the heat and skim the jelly meticulously. Leave for about five minutes. Add the chopped mint and stir well. Leave the jelly again and then stir to make sure that the mint is being held in suspension in the jelly and not all rising up to the top.
Ladle into jars as before, and seal. Leave to cool and keep an eye on them. If the mint leaves are all huddling together, invert the jars for a minute or so to let the mint flecks resettle.
Posted by Christina at 16:31 No comments:

I have two carrier bags full of apples, mostly cookers, waiting hopefully in the kitchen at present. That’s too much apple and rosewater sorbet for me to think about, so instead I’m going to make apple jellies.
Or at least, I’m going to think about making a few different apple jellies. What I’ll get going with straightaway is turning 10kg of apples into the apple juice that will form the base for the jelly. Once I have the basic juice it will keep in the fridge for a few days, or if I run seriously short of inspiration, it will freeze. Or I can make cider.
Apple jelly is particularly versatile: tasty enough to eat on its own as a spread or with meat, but also good to add flavour and consistency to gravy, and sauces, for deglazing the pan after cooking meats. With a high pectin content, it will help to set jellies whose main flavouring ingredient doesn’t contain pectin – chilli jelly, mint jelly, for example.
As well as an unadulterated apple jelly, which should set to a beautiful clear amber colour, I’d like a warm spiced version – perhaps with cloves and/or ginger, and in contrast something lighter, possibly floral. I have a recipe for apple and geranium jelly in The National Trust's book Jams, Preserves & Edible Gifts, by Sara Paston-Williams, and since I don’t have any geraniums, I wonder if the rest of that rosewater might do stand-in duty for the geraniums.
I also like the idea of adding a hint of thyme; rosemary appeals as well but I think it would be easy to make it rather overpowering.
Posted by Christina at 16:25 No comments:

My brother gave me a substantial wedge from a pumpkin he’d grown to the size of a small car. After hauling it home and idly wondering just how many gallons of pumpkin soup it would make, I decided I could make it last longer without feeling pressured to eat giant pumpkin every day by pickling it.
Skye Gyngell has a great pickled pumpkin recipe in My Favourite Ingredients – the pickling liquor is not unlike a curiously-flavoured mulled wine, with a bottle of white, plus 200ml red wine vinegar, 220ml caster sugar and bay leaves, coriander and fennel seeds. I now have two huge Kilner jars full of pickled pumpkin: good, I think, with cheese, and cold ham and leftover beef, if we ever have any.
Posted by Christina at 16:16 No comments: 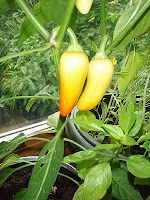 I removed a crop of aphids from my indoor chilli plants this afternoon. Anything indoors near an open window or door will attract aphids and as usual I'd failed to spot them until they had taken hold and were thick under each leaf.

Over the years I've tried various methods of getting rid of aphids. Soapy water in a spray bottle seems to be the most obvious solution, but I have trouble finding the correct ratio of washing up liquid to water. Too diluted and the aphids survive; too concentrated and it damages the plant. Plus, the chillies themselves are pretty much ripe and I've started picking them, I don't really want them covered in detergent.


Jekka McVicar (of Jekka's Herb Farm) recommends making up a garlic infusion and spraying that instead, but I haven't found that entirely satisfactory. The aphids make the leaves and stems sticky. The garlic solution also makes them sticky, which makes the plants quite unpleasant to handle. (I think you're supposed to use the garlic solution more as a preventative than a cure.)


What I do, and it seems to work, is to take the plants outside into the garden, turn the nozzle of the garden hose on to its fiercest, most powerful setting, and blast the plant with a laser-like jet of water. The plant invariably falls over, and this time leaves fell off (though the fruit stayed intact). Once I'm sure every inch of the plant has been squirted, I leave it to drip dry a bit, then bring it back indoors. I'm not sure if the aphids are drowned or blasted right off the plant, and I don't really care.


Obviously this wouldn't be any good for seedlings or anything fragile, but chilli plants seem to stand up to it remarkably well.
Posted by Christina at 18:00 No comments:


This week it has been mainly dessert apples, many of which we'll simply eat straight from the fruit bowl. But I also found this lovely recipe for apple and rosewater sorbet in Sybil Kapoor's Modern British Food, a book which I've had for about 12 years now and which is packed with enticing dishes. I still keep dipping into it for inspiration every now and again.


The original recipe calls for 2 tbsp of rosewater, which makes the sorbet very floral. I found 2 teaspoons gave it a much more subtle scent. I also don't have an ice-cream maker, and it doesn't seem necessary here; I have described how I beat the sorbet mixture manually on a regular basis to get the right texture when frozen.


Juice of a lemon and the zest from about half of it
Half a pint of water
1lb apples, peeled and cored
4-5oz sugar
2 teasp rosewater (or to taste)
Put the lemon juice, zest and water in a pan. Chop the apple into smallish cubes and add to the pan. Bring to the boil and simmer until the apples are soft and have gone a bit mushy. Remove from pan, cool slightly and whizz in the blender until smooth.
Stir in the sugar – 4oz to start with, then more if you think it needs it. Leave to cool completely.
When cold add the rosewater until it can just be tasted in the apple puree.
Pour the mixture into a Tupperware tub with a lid and put in the freezer. Every half an hour, take the tub out and stir the puree well, bringing in all the frozen bits from the sides and mixing well with the rest of it. Should be frozen enough in 2-3 hours.
Posted by Christina at 23:06 No comments: