I planted out these heavily guarded brassica seedlings yesterday. Bitter experience has taught me that they need this level of protection. The copper-lined collars are made from sections of 500ml plastic water bottles trimmed with copper tape around the top and will deter slugs and snails. The metal reacts with the mollusc's mucus when it tries to cross the copper strip and gives it a shock-like sensation.


I've found these home-made copper rings perfectly effective and use them with brassica seedlings, cucurbit seedlings, lettuces, of course, and also globe artichokes when they are first planted out. I can still remember the heartbreak of coming home after an Easter weekend away and finding my globe artichokes, planted out on Maundy Thursday, had vanished. The only clues to their disappearance were a number of long, ribbon-like, shiny trails.


The only drawback really, apart from the need to have as many collars as you have seedlings in the ground at any one time, is that the slug/snail population isn't controlled. In a particularly sluggy year, they will go off to try to find something else to eat that's unprotected. One year I found slugs attacking the beetroot, which is not normally vulnerable. This year, with a wet April with showers interspersed with sunshine, we are on Code Red as far as slugs and snails are concerned.


The second level of protection here is the perimeter planting of various alliums. I have deliberately positioned garlic (pictured here is Solent Wight, with elephant garlic out of shot) and onions around the outside of the raised bed to deter cabbage whitefly. Alliums are often planted with carrots to deter carrot fly, as it is said that the onion smell confuses the carrot fly (and also that the reverse holds true, the carrot smell deters the onion fly who is after an allium snack).


Here I am hoping that the same principle holds true against whitefly. If this mini-trial proves successful, and the kohl rabi and kailans in the raised bed remain relatively whitefly-free, I will extend it to the main brassica bed, where the cauliflower, broccoli and cavolo nero will be planted later in the summer. Last year, the cavolo nero in particular was horribly infested with whitefly to the point of not being able to harvest it.


Copper tape is available from larger garden centres and from a number of online gardening suppliers. It's well worth searching and shopping around as prices can vary widely. Copper rings are also available but tend to be much more expensive while performing exactly the same function as the homemade rings here. For a copper ring with a larger diameter cut sections from a 2l water bottle.

Posted by Christina at 17:44 No comments: 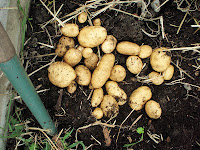 Veg in a box

I've resubscribed to an organic veg box scheme to keep us going until the allotment produce kicks in again in June or thereabouts (assuming the sugar snaps, asparagus and lettuce don't all shrivel up in the drought, that is). We've managed without for the last couple of years, but the hungry gap seems to be particularly ravenous this year. And Abel & Cole were offering a free bottle of wine and cookbook for returning customers. I am that easily bought.

There's always a sense of anticipation opening up the box: this week it included a big flossy lettuce, a mango, aubergine, red pepper and purple sprouting broccoli. The basics - onions, carrots, potatoes, apples - I'd taken for granted.

I earmarked three of the carrots for an Easter weekend carrot cake (at least a day late, I know), for which I follow Nigel Slater's recipe to the letter. I'm sure it's my carrot cake of choice mainly because the quantities of icing that the recipe makes are so absurdly lavish that there are plentiful bowl scrapings to be had.

With the cake safely in the oven, I surveyed the rest of the contents of the box and decided to put the basics to good use with some brunch-style potato and apple cakes, which go so brilliantly with bacon rashers, or for non-meat eaters, a poached egg on top.

Grate the potato, apple, and onion/shallot. Beat the egg quickly and stir in, a little at a time until the mixture glistens without being sloppy. Season well.

Heat around 20g of butter and 1 tbsp or so of olive oil in a non-stick frying pan over a medium heat. Place a cookie cutter (about 3 inches or 75mm in diameter) in the frying pan and spoon enough mixture into the cutter so that the potato cake is about 1cm thick. Leave for around 20 seconds, so that the cake starts to cook on the bottom, then lift the cutter carefully and place elsewhere in the pan to make the next cake. This amount of mixture will make 6-7 potato cakes.

Fry for 5 minutes, then flip each cake over and fry for another 5 minutes until cooked through. The top and bottom of each cake should be nicely browned. Dish up on to kitchen paper to drain off excess oil, then serve hot.
Posted by Christina at 16:11 No comments: