I have my favourites in the kitchen garden, the crops I can’t imagine being without. I can’t imagine tiring of first early Lady Christl potatoes, or the candy-striped Chioggia beetroot, sugar snap peas, cavolo nero or Berrettina Piacentina squash or Sungold and Black Russian tomatoes.

But in other areas I am a lot more fickle. Quite deliberately I look for new veg and new varieties to try each year. It’s part of why I took on the allotment and the luxury of space for experimentation. Last year, I successfully grew ginger (indoors), physalis and sweet onions for the first time and was correspondingly unsuccessful with celeriac; the year before I had a complete 'mare with salsify.

This year’s newbies show a bias towards the new world. It’s partly intentional as I’m developing a Secret Garden Club workshop based on the food from the Americas, so some of the new produce is being grown for harvesting and tasting for the meet-up on September 1st (more info and ticket details here).

Posted by Christina at 17:30 No comments:

Pink and perky: forcing rhubarb for an early harvest

Forced rhubarb is that which has been made to grow earlier than usual by being kept in the dark. This is what they do to the rhubarb grown in huge sheds in the famous Wakefield triangle, and sold - at a premium - in shops from December onwards, but it's very easy to force your rhubarb plants on a domestic scale as well. The resulting stems are rosy pink, long and slim. They taste slightly sweeter than conventionally grown stalks, perhaps all the more so for being available when most homegrown produce is either dormant or left over from the autumn.

You can buy special pots for forcing rhubarb but apart from a certain aesthetic appeal I’m not sure what the point of them is. All you need is a bucket, a weight – half a concrete slab will do – and some straw or similar packing material.
Once your rhubarb shows the first signs of coming to life again in January, up-end the bucket over the budding root. Put the weight on top to ensure the bucket doesn’t get blown over. Pack the straw around the base of the bucket inside and out to ensure that all light is excluded from the interior of the bucket. The budding rhubarb needs total darkness.

Wait six weeks or so – anywhere between four weeks and eight in my experience. Start checking after four, anyway. You should be able to harvest your slim, pale pink, forced rhubarb in February and March.

Make a note of which of your rhubarb crowns you forced this year and do not force these particular plants again next year. Give them a chance to grow on naturally before forcing again.

Forced rhubarb is more tender than conventionally grown stalks so treat it gently for cooking. I love rhubarb crumble but always feel this is a quite a hefty treatment for these more delicate stems. I usually simmer them, either on top of the cooker in a pan, or in the oven, in a very light syrup, or with orange juice. I also like the idea of serving rhubarb with meat or fish as part of the man course - Jamie Oliver teams rhubarb with pork in a number of recipes and Hugh Fearnley-Whittingstall has an interesting-looking recipe for forced rhubarb with mackerel in The Guardian this week. 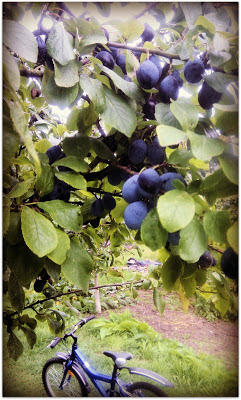 Posted by Christina at 19:58 No comments: