Pumpkins - up or down?

Squash and pumpkins will expand to fill the available space, I find. If you put them in the garden they will run riot all over the garden. If you put them in the allotment then by September you'll find pumpkin stems and leaves trailing across all your beds.
My preferred solution has always been to train them upwards: to give them a climbing frame such as 10cm plastic mesh secured with bamboo canes. With a little initial encouragement and tying in, the plants soon get the idea and ramble upwards instead of out towards the neighbouring plot. I have indeed seen someone use an actual climbing frame, presumably one the kids had grown out of, for this purpose very successfully, but plastic mesh and bamboo will stand up to the task remarkably well.
This year, however, I need the squash to trail along the ground. I'm growing them as the Native Americans traditionally did, alongside climbing beans and sweetcorn in a companion planting partnership known as the Three Sisters. The sweetcorn provides a sturdy stem for the beans to scramble up; the broad-leaved squash will provide ground cover, suppressing weed growth and reducing water loss by evaporation.
Once all the fruit have been harvested from each of the plants, the green matter can be dug back into the soil for the next year's crop. As well as nutrients from the gradually decomposing greenery, the beans will also fix nitrogen from their roots to feed the soil for the following months.
The Three Sisters and other companion planting schemes is the subject of our next Secret Garden Club workshop on Sunday May 27. We'll be explaining how to adapt the traditional Three Sisters planting to the cooler, more unpredictable British climate, and how to grow specific plants together to deter pests. MsMarmiteLover is devising a Cherokee-inspired feast to follow the planting session. Click here for details and how to book tickets. 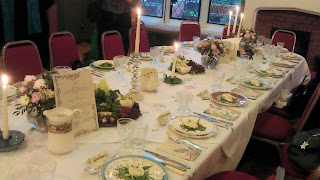 Posted by Christina at 21:37 No comments: 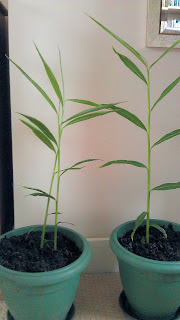 Those fresh ginger roots which I bought from a local mini-mart and buried in compost back in February have now outgrown their first 12cm pots, with roots protruding from the drainage holes at the bottom and the plants themselves about 60cm tall. I repotted them at the weekend into 20cm pots and have moved them to another sunny windowsill where they have more space.

As it is still so cold outside, especially at night, I'm not thinking of moving them out of the house anytime soon.

Most of the books and websites I've consulted suggest that I'll be lucky to get anything much in the way of new rhizome growth that I can call a crop, so for the time being I shall just enjoy the plants, which look very stately with their tall, upright bearing and slim leaves.
Posted by Christina at 14:15 No comments: