I'm a bit of a sale-shelf addict. I can't seem to resist the challenge of revitalising Pittosporums or flopped Buddlejas and so I have been lurking around the bargain plant bins again. Most garden centres and many nurseries have them: shelves of the wilted, the straggly and the frankly half-dead, knocked down to rock bottom prices, 50p here, a pound or two there. My local Homebase sometimes lets you take plants away for free if they think they can't charge anything at all.

There are some great bargains to be had here. Often the plants are just dried out from lack of water and will revive after a good soak. Others have lost their shape and grown straggly, but misshapen plants are welcome: a severe prune and then some TLC will usually see new shoots growing. Reduced price plants have often finished flowering for the season so once you have nursed them back to health you will need to keep them going until next year, but then they will frequently come back as good as new.

Having accumulated a collection of sale item plants that threatened to take over the garden, I had to start planting them out.. Those that haven't found an obvious home in an existing bed have gone into the dedicated rescue plant border: a 7m x 1m strip that is still very much a work in progress and which is being filled, bit by bit, by my bargain basement plants. 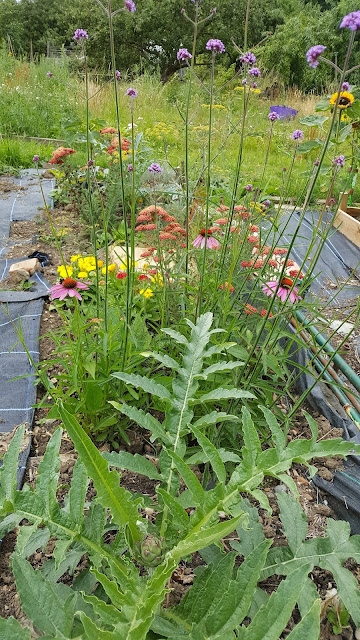 I have cheated a little bit by including not just cut-price specimens, but freebies: there's a fig tree at the far end which is a cutting from the mature tree in the garden, and the globe artichoke plants are offshoots from the older plants on the allotment. So far, though, I reckon the bed has cost around a tenner to plant up. 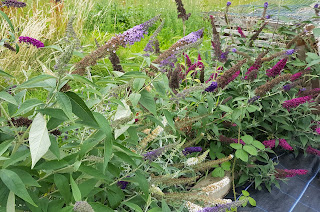 Buddleja are a staple of the garden centre sale shelves, and a couple of years ago I started collecting up Buddleja specimens, preferably with flowers in hot pink, crimson, or deep, deep purple, indigo and also white ... anything, in fact, except railway cutting mauve. This year I have had enough to plant up an informal Buddleja hedge, which should come back year after year and all, again, for around £10 in total.

I have become a bit more discerning over the years though: I used to scoop up the entire contents of the sale rail into my arms as though I was rescuing them from the Child Catcher. Now I am more discriminating about which plants make it into the trolley.

Firstly, I buy nothing that is actually dead. Some sign of life is required. Don't buy anything that is diseased: you don't want to bring spider mite, mildew, mealy bug or whatever into your garden and spread it around your plants. It is worth checking the rootball, if you can, to make sure a) the plant has enough in the way of root to revive and b) that there aren't any weevils or other nasties lurking in the soil.

I also don't buy bedding plants - towards the end of the season, what's the point? Or lavender, these days, since you can buy really good-sized plug plants at the beginning of the season for around £1 a plant. And you can take cuttings very easily in June. It feels a bit like a loss, though, because there is always lavender on the reduced price shelf.
Finally, it has to feel like a bargain. And you have to accept that some of the plants won't survive long-term and that they really were at death's door and not even worth the 50p asking price. 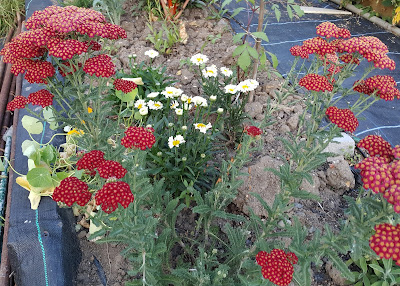 Posted by Christina at 12:48 No comments: