The Secret Garden Club does ... Herbs and medicinal plants


I've been felled by a cough and cold since the meeting; luckily one of our guests was able to supply her very own herbal remedy for easing coughs and congestion:


5-7cm peeled fresh ginger root, roughly chopped
1.5 tbsp well-chopped fresh rosemary. (You can add more if you like but this is a good starting point)

Simmer these in a pot with 700 ml water for about 10 mins. Strain into a cup and add a squeeze of lemon and honey to taste.

Next month The Secret Garden Club will meet on February 26th and we'll be looking at potatoes. We'll have some unusual potato varieties to try out, both in the kitchen and in the garden and we'll be discussing how to raise a fine crop of potatoes even if you have no garden - by growing them in a bin-liner. More details - including how to book your tickets - on the Events page on the Club's website.
Posted by Christina at 14:16 2 comments:

Lithops and iguanas at Kew Gardens

A wintry visit to Kew Gardens where I struggled with vertigo on the Treetop Walkway – it’s much easier in summer when I can’t see so much of the ground under the tree canopy – and made sure I spent time admiring the Lithops, or pebble plants, in the Princess Of Wales conservatory.
These remarkable plants do indeed look like pebbles, and we could only spot some of them because they were in flower. The rounded ‘stones’ are in fact fleshy leaves. In the wild, they grow – unsurprisingly – in the Namibian desert where they can expect a bare 10mm of rain a year. 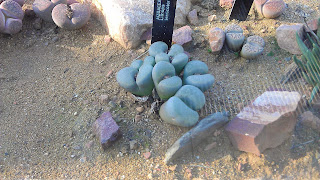 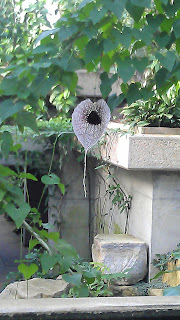 There were a couple of gruesomely attractive Aristolochia in flower as well (right) and the Titan Arum (Amorphophallus titanum, which directly translates as Giant Formless Penis, and is the largest (unbranched) flower in the world) had only just finished flowering – and the plant looked exhausted as a consequence.


A particularly charming sight was this iguana (below), peeping out from behind a pillar in the conservatory. "They get them from Heathrow," said one man as he saw me staring up at it. "All the animals they try to smuggle into the country, they donate them to Kew." I have no idea if this can be true or not; if so, this asylum-seeking iguana has landed on his feet.

A thought occurred to me in the side room that houses the canriviorous plants – the Venus’s flytraps and pitcher plants: there are a lot of plants in this particular greenhouse and the windows aren’t enormous. Do they really get enough flies buzzing in naturally to feed all these plants or do they have to breed and release them to sate the plants’ appetites?

Pumpkin pasties and other squashy delicacies 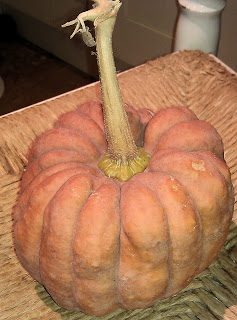 The pumpkins harvested from the allotment in October have been sitting on top of the kitchen cupboards maturing over the autumn and winter. The dark green Futsu is now a rich ochre colour (see picture, left) and the butternut squash have mellowed from a creamy jade skin to buttery yellow.
It's around now that I cast around for ways to cook them, versatile as they are. Pumpkins are often useful at Christmas time as they will easily feed a crowd, and also I think they always feel like a 'special occasion' food.
Smooth pumpkin soup
A straightforward pumpkin soup – this works best with a dense fleshed variety such as Berrettina Piacentina, which tastes like a cross between sweet potato and chestnuts and has a texture not dissimilar to sweet potato as well. Butternut squash is also good here; anything more fibrous than a butternut might require more in the way of pulping and sieving.
Peel and remove the seeds from half a medium-sized pumpkin. Chop the flesh into roughly 3cm cubes. Put on a baking tray, season lightly with salt and pepper, drizzle with olive oil and roast for 20 mins or so at 200 degrees.
Meanwhile, chop up an onion and two cloves of garlic and sauté them lightly in a splash of olive oil a large pan. They might colour slightly but don't let them brown. When ready, add the squash pieces and enough vegetable stock (eg, Marigold bouillon if none fresh to hand) to cover generously. Simmer for around 15 minutes, then whizz up in the blender.
Taste and adjust seasoning. Divide into bowls for each person and finish with either a swirl of crème faiche, or a dusting of smoked paprika, or a swirl of rose harissa, or a splash of walnut oil, or extravagantly, truffle oil.
For a Thai-flavoured version, add a tablespoonful of red Thai curry paste and some chopped ginger when you mix the roasted pumpkin pieces with the onion and garlic. Stir in a 400ml can of coconut cream with half the amount of stock.
Roast pumpkin slices glazed with soy sauce
Halve a medium-sized pumpkin and remove the seeds. No need to peel. Cut into slimmish wedges and place in a shallow dish. Splash over some olive oil and soy sauce, season and toss the pumpkin pieces until well covered. Leave for 15 mins to an hour, then either tuck the individual pieces around a roasting meat joint, or transfer the whole lot to the oven and roast for around 30 mins at 180 degrees.
Pumpkin pasties
These are mentioned in Harry Potter which might make them tempting to children. On the other hand, it might not, as the pasties served on the Hogwarts Express are clearly meant to be sweet, whereas I can’t bring myself to treat pumpkin as a dessert. 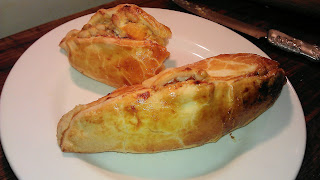 Pastry:
Either – one pack of ready-made shortcrust pastry, or,
225g plain flour
105g butter
Salt
Iced water
1 egg, beaten
Filling:
1-2 shallots
400g flesh from a small butternut squash or similar pumpkin, peeled, seeded and chopped into chunks
125g ricotta cheese
I tbsp Parmesan
1 tbsp chopped fresh mint leaves
Salt
Pepper
Heat the oven to 200 degrees.
First, make the pastry. If you’re making your own, cut the butter into little pieces and whizz with the flour and a pinch of salt in a food processor until it just begins to look like breadcrumbs. Add the water a tablespoon at a time, the then pulse to mix. Stop as soon as the dough looks as though it’s beginning to come together.
Turn out of the processor bowl on to a floured worktop and mould the mixture lightly with your hands until it forms a dough. Wrap in greasproof paper or clingfilm and chill in the fridge for at least half an hour or until needed.
Or, unwrap a sheet of ready-made shortcrust and roll out thinly.
While the pastry is chilling, toss the squash/pumpkin in olive oil, season lightly with salt and pepper and bake/roast, uncovered for around 30 minutes until soft and just beginning to brown at the edges.
Meanwhile, chop the shallots and fry gently in a little olive oil until soft. Pile into a bowl, and add the ricotta and Parmesan. Once the squash chunks are cool enough to handle, chop into 1cm cubes and add to the ricotta mixture. Add the mint leaves and stir well. Season to taste with salt and pepper.
Roll out the pastry on a floured worktop until it’s nice and thin. Have the beaten egg and a pastry brush to hand. Up-end a 10cm circular cereal bowl on the pastry to make a template for the pasty and cut around the bowl with a short sharp knife. Put around 1½ tbsp of pumpkin mix in the middle of the pastry cut-out, then brush the outside edge of the circle with beaten egg. Fold the pastry over into a semi-circle and crimp the edges together with your fingers so that they stick together. Place the pasty, crimped edge upwards on a baking sheet and brush the outside all over with more egg. Repeat to make around five more pasties – you may need to roll out the pastry again.
Put the baking tray with the pasties in the oven for 30 mins. They can be eaten hot or cold.
Posted by Christina at 21:06 No comments: