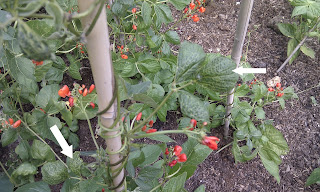 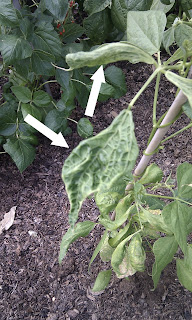 Every year, one of my ‘banker’ vegetables, the ones that reliably produce a crop year in, year out, will mysteriously fail. Last year it was the courgettes: the plants refused to grow, the leaves were spindly, the fruits – those that didn’t rot at 3inches or so – were skinny and tasteless. While everyone else bemoaned their glut, I thought how nice even one-tenth of a glut would be.
This year, it’s the beans. And worryingly, I mean all the beans: the runners, the Asturians, the borlottis and the Frenchies. The runner and borlotti beans almost certainly have bean common mosaic virus. I say ‘almost’ because while they’re definitely got something, I’ve been scouring Google images and the only BCMV picture that definitely looks like my sickly plants is one illustrating the effects of BCMV in western Africa. The mottling in my leaves is more like dark green bubble wrap than yellowing and curling.
The Asturian beans, which might normally be the prime suspect for introducing a virus, since I buy culinary Fabes de la Granja from the supermarkets of Asturias and sow these instead of ordering certified virus free seeds, look relatively healthy.
The French beans stubbornly refused to germinate at the first sowing ... and again at the second ... and so finally I consulted the small print on the back of the packet and discovered that, yes, they were three years past their sell-by date. Then the Blue Lake and Trionfo Violetto did germinate at the third time of asking and produced a few straggly plants that are still struggling to climb their canes. But at least they look healthy.
I’m going to miss the beans this year. There are usually enough French beans to give to friends and neighbours and the Asturians and borlottis keep us in dried beans throughout the winter. My Internet research – and also Pests, Diseases and Disorders of Garden Plants, by Stefan Buczacki, Keith Harris and Brian Hargreaves – suggests that even if I get off lightly, yields will be much reduced.
Posted by Christina at 21:23 No comments:

Back in May, I arrived at the allotment on a chilly Thursday morning to find my newly-emerged potato plants soggy limp and brown. Some of the more exposed parts of the allotment site had been hit by frost overnight. In May ... normally I consider this area frost-free by the end of March. May is unheard of – until now.
Despite many kind plot neighbours offering reassurance that the plants would recover, that it was only an air frost, that the worst that would happen would be a slightly late harvest, in fact these first earlies never really recovered.
The maincrop Pink Fir Apples seem to be OK – they were still underground when the temperature dropped below zero.
Posted by Christina at 16:04 No comments:

Lots of germination problems this year: French beans and parsnips mainly, but also with the calabrese. Having sowed seeds in 30 modules, I have just four (perfectly formed) calabrese seedlings coming. To give myself a head start, I headed off to the Cottage Garden Nursery today and bought 12 very healthy Calabrese Samson specimens, now transplanted into the brassica bed and under the butterfly net.
Also lifted the rest of the garlic – a really good crop of 25 good-sized bulbs, that winter chill must have done them good – and harvested the blackcurrants. I always cut the fruit on the branch so that the bushes are pruned as the fruit are harvested and the crop has filled four rubble sacks. I haven’t mustered the energy to strip the fruits yet, so I don’t know exactly how much we have, but I do remember they only filled three rubble sacks last year.
Posted by Christina at 20:48 No comments:

Beetroot in the gutter 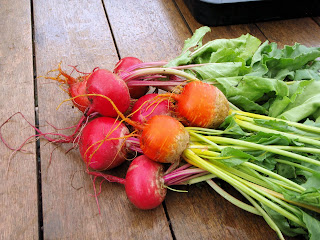 For the last couple of years, I’ve sown my mange tout and sugar snap peas in lengths of half-guttering. It seems to ensure near 100% germination – especially in the sugar snaps, which I’ve had very variable results with when sown direct. We also get a lot of pea weevil damage at the allotment – those distinct U-shaped bites which make the seedling leaves look very crenellated – and the plants withstand that better if they are bigger when transplanted into pea weevil territory.
(I transplant the pea seedlings when they are about 3 inches tall. I water the plants in the guttering until they are soaking wet, then slide them out of the gutter into a shallow pre-dug. So long as the soil is uniformly very wet the plants slide out with little or no root disturbance.)
I hadn’t thought of starting any other crops off in half-guttering until I was wondering aloud to my plot neighbour why his beetroot were regularly the size of grapefruit while those of mine which germinated were mostly the size of ping pong balls. He suggested sowing the beetroot in half-guttering the same way as with the peas.
In the end I sowed four 1m lengths more or less successionally and while it’s obviously more labour intensive than direct sowing, I got pretty much 100% germination – even from the Burpees Golden variety which are notoriously poor germinators – and a crop which looks as though it’s going to be very uniform in size. I have moved up from ping pong balls to tennis ball sized roots which is also pleasing and will definitely be sowing in guttering again next year.
Posted by Christina at 17:51 No comments: