A gallery of pumpkins 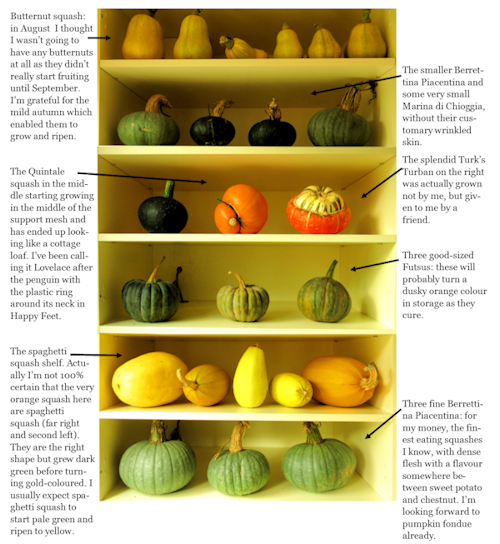 When it comes to growing pumpkins, I'm happy to leave the cultivation of giant specimens to others. I've grown a few up to spacehopper size in the past, but it never seems to be the tastier varieties which grow really big. Football sized is about right - the green Berrettinas on the bottom shelf here are just a little but larger than that, and bowling ball sized - the green Futsus in the middle - will do just fine as well.

I've also never got round to growing them on the compost heap, as others swear by, and which can give you highly productive plants as I noticed on my recent visit to Great Dixter. I start my squash seeds in pots and once they have at least two true leaves, plant them out in a bed with lots of organic matter - including kitchen compost - dug in. Before planting, I cover the bed with sheet plastic, and cut holes in it to plant the seedlings through - this keeps the moisture in and the weeds down. I also give the plants a mesh trellis to scramble up, which has two advantages: it keeps the squash plants more or less to the bed you planted them in, rather than rambling all over the allotment, and it means most of the fruits grow off the ground and are less vulnerable to slugs, snails, and rotting where the thin skin is laid on damp grass or soil.

In most years, the foliage starts to die off towards the end of September, and by mid-October, the fruits are laid bare across the bed - sometimes attached to the main plant by a mere thread. The squash will be ready to pick and bring inside then (squash ready for picking will also sound distinctly hollow when tapped). This year, with such a warm autumn, the plants stayed lush and green right through to the middle of October and I lifted them last week when our first frost threatened (frost will turn the pumpkins to mush).

Once safely indoors, they can be stored somewhere bright and warm - by the kitchen window, in my case - to be 'cured'. In warmer climates with longer growing seasons, pumpkins can be cured out in the field, but it's getting a bit chilly for that here in England now. Curing hardens the skins (which helps them to store for longer) and develops the flavour. You should really store the pumpkins for 10-14 days in the warm and then remove the fruits somewhere cooler, ideally at a steady 12 degrees Celsius or so, for storage, but mine stay happily in the kitchen window throughout the winter months. Those still uneaten after Christmas will store right through into the next spring.

Incidentally, I've never been quite sure which types of squash can call themselves pumpkins. Although we traditionally think of pumpkins as orange Hallowe'en lanterns, I would also call the Berrettina Piacentina and Marina di Chioggia here pumpkins, as well as other green varieties like Crown Prince. I've seen it suggested that one thing that distinguishes a pumpkin as a particular type of squash is that its seeds are edible.

Posted by Christina at 16:46 No comments: