The last of the apples

Among the chillies I grew this year was a yellow variety called Hot Lemon from Nicky’s Seeds. It lived up to its name, ripening from emerald green to a bright lemon yellow, a punchily hot flavour and, yes, a distinctly citrusy tang.
I had thought my final apple jelly might be a spicy version with cinnamon, cloves and maybe some ginger, but then remembering the success of the red chilli jelly I made last year based on Nigella Lawson’s recipe, I decided a clear clean sharp lemon version using these chillies might be the best way to use them.
It took a couple of goes to get it right – my first attempt was visually stunning, a shimmering pale yellow, looking more like Roses’ Lime Marmalade, but the set was too weak. Once the liquor was boiled down to a good set, the colour was more amber than lemon, but the taste is there – hot, sweet and crystal sharp all at the same time.
Lemon chilli jelly
150ml cider vinegar
750ml water
Juice of 4 lemons
1½kg cooking apples
600ml juice
450g sugar
1 large yellow pepper
150g yellow chillies, eg, Hot Lemon, or Aji Amarillo
Put all the liquid ingredients in a large pan. Roughly chop the apples – do not peel or core, but discard any bruised, damaged or holed bits – and add to the pan. Bring to the boil and simmer for around 45 minutes, stirring and squishing the apples from time to time.
Let the mixture cool a little, then strain through a jelly bag or butter muslin overnight. Do not try to speed the process up by squeezing or pushing the liquid through the fabric, or the resulting liquid will make a cloudy jelly. Just let it drip.
The next day, measure out your juice into a large pan. For each 600ml juice, add 450g sugar, and heat, gently at first to dissolve the sugar, then turn the heat up so that the mixture can boil hard. Meanwhile, core and deseed the pepper, removing any white pith and cut into large pieces. Cut the stalks off the chillies, slice in half lengthways and remove the seeds and core. Put the pepper pieces and chillies into a food processor and blitz until well minced.
Back to the jelly - when the setting point has been reached, skim the surface very carefully to leave the liquid clear, then add the minced chilli and pepper pieces. Leave the jelly to cool in the pan until it is just beginning to solidify, then ladle into sterilised jars, seal and label. 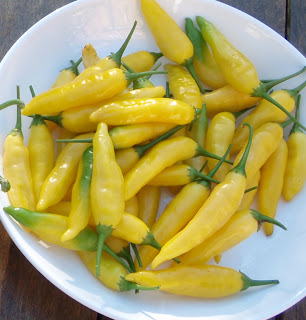 Posted by Christina at 20:44 No comments:

I hauled out the sweetcorn today and dug over the bed, disturbing a colony of chafer grubs in the process. These are the fat white grubs with a brown head and six little legs up at the head end. They are disconcertingly big - approaching the size of my little finger - and voracious eaters. Apparently they are particularly fond of potato roots, which is not good news since this year's sweetcorn bed is meant to be next year's potato bed.

I removed each one from the soil, placed them on a flat gravel board, and waited for the tame robin who follows me and my garden fork around the allotment. He was along in a couple of minutes and homed in on the beached chafer grubs, picking one up in his beak and hopping off. When I next glanced his way, he was still clutching the grub and shaking his head from side to side as if wondering what to do with it. Then he seemed to give the whole thing up, dropped the chafer grub on the ground and flew away.


I need some bigger birds.
Posted by Christina at 20:08 No comments: