To Petersham Nurseries and a talk by acclaimed Australian chef and writer Stephanie Alexander to mark the launch of the northern hemisphere localised edition of her Kitchen Garden Companion. This book details growing fruit and vegetables, all listed in alphabetical order and each with 4-5 dedicated recipes. Produce and recipes are chosen with a view to getting the whole family – especially children – involved in growing, maintaining, harvesting, preparing, cooking and eating. This is because the book was written following Stephanie’s pioneering scheme in Australia to get children growing and cooking vegetables in primary schools.
When concern was first raised in Australia about its children’s diet and their fondness for fast food, and processed food, Stephanie says the reaction of the government was to “write pamphlets, make pyramids and shake their fingers at children, saying don't do this and don't do that”.
“It seemed to me to be as plain as the nose on your face,” she went on, “That we should get children engaged in growing fresh food. And I mean cooking real food – not just cupcakes.”
Hear, hear. As someone who has ‘done’ gardening sessions at my son's school, I am always amused/amazed/heartened to see children who declared that they didn't potatoes that weren’t chips (“or crisps!”) or that they didn't like tomatoes, tucking in enthusiastically when they had had a hand in growing them. They feel they have invested in them. 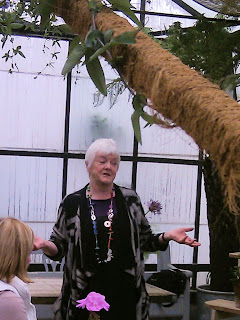 Stephanie started with a kitchen garden programme in one school, digging up part of the playground and refurbishing a derelict kitchen, and involving children aged between 8 and 11. Hugely successful, she brought government ministers down to the school to eat fennel risotto and beet salad produced by the children and to secure government support for expanding the scheme (she also says she’s been talking to Jamie Oliver about this very aspect of the scheme while she’s in the UK), and now the Kitchen Garden Foundation is operational in 191 primary schools across Australia.
The book, she says, was written to spread the word even further. Now launched in the UK, it has thankfully been edited to reflect the seasons here rather than in Australia, although I notice there are other Antipodeanisms left intact (silverbeet for Swiss chard, eggplant for aubergine, for example).
Stephanie was an engaging speaker and of course the surroundings at Petersham were idyllic, made even more so by the fresh jugs of limeade on the tables and the baskets of crudités and freshly-made mayonnaise brought round halfway through the session. Although Stephanie did say, eyeing her audience, which included a fair few Aussie ex-pats and several people who had visited her Richmond Hill Cafe in Melbourne, that she suspected she was preaching to the converted.
Could something like the Kitchen Garden Foundation happen in the UK? The Sunday supplements carry stories of ‘urban children discovering beans don't grow in cans’ fairly regularly, but the schemes are all run by volunteers. The RHS has its Campaign For School Gardening, which aims to get children involved with creating and maintaining school gardens - less so on cooking and eating produce - and relies heavily on volunteer help. I spent two years showing pupils in my son's school how to grow and then cook fruit and vegetables in years one and two – even by year three it’s difficult for teachers to find the time and for many schools there is an issue of space.
The trick is to find a teacher - preferably a head – who buys into the scheme from the off. Stephanie Alexander says her first school was run by an Italian headteacher, “so she didn’t need to be convinced about the benefits of learning about fresh food”. 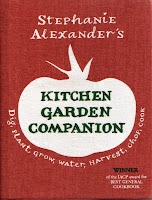