A glut of gooseberries

I am – barely – managing a glut of gooseberries at the moment. Last year my three gooseberry Pax bushes managed a grand total of eight fruits, each devoured in situ, and in a single morning, I think. This year, each bush is groaning with beautiful, crimson-blushed fruit and with the recent downpours after the drought, some of the fruits are beginning to split.
I’ve found myself at a bit of a loss to know what to do with them. A crop that gives you enough for some fruit salads and maybe a couple of fools is one thing, but this year’s harvest requires something more in the way of mass production. Perhaps a chutney? We have been missing a good chutney over the last winter and spring: usually I make a green tomato chutney in October to use up the last of the fruits that haven’t yet turned red. Last year, I was still waiting for any ripe tomatoes in October and I really couldn’t face making chutney out of the whole crop. So a gooseberry will usefully fill a gap in the store cupboard; the sharp-sweet flavour of gooseberries seems well-suited to a chutney as well.


Gooseberry chutney with cranberries and fennel 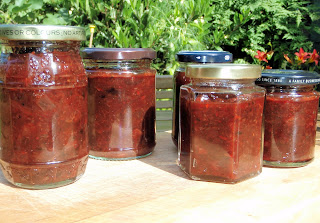 Made with sweet amber gooseberries, this cooks to a glorious deep maroon colour. The cranberries were included as an alternative to the more usual raisins and actually may help more with the colour than anything else. The fennel notes, which cut the sharpness of the gooseberries, are quite subtle even with the addition of a whole star anise. I did consider using fennel seeds in the spice mix and would normally do so, but on this occasion thought it might just overload the chutney with aniseed.
1.2kg gooseberries
300ml cider vinegar
500g light brown sugar
1 onion, chopped
1 fat fennel bulb, chopped
100g dried cranberries
2cm cinnamon stick, ground
1 star anise
2 tspcrushed black peppercorns
1 tsp Szechuan pepper
3 cloves
1 cardamom pod, crushed
½ tsp turmeric
Rinse the gooseberries, then top and tail them. In a large pan, bring the gooseberries and vinegar to the boil and simmer until the gooseberries are disintegrating – about 10-20 minutes depending on how ripe the gooseberries are.
Add the onion, fennel, cranberries and sugar and stir well to dissolve the sugar. Bring to a simmer. Lightly pound the spices, apart from the star, together to a coarse powder and add to the pan. Simmer gently for about 2 hours, until the mixture has cooked right down and is sticky rather than soupy.
While it’s cooking, sterilise your jars so that the chutney can be potted up and sealed as soon as it’s ready.