Home from Asturias, that enclave of Spain known, improbably enough, for beans, blue cheese and cider, all to be eaten and drunk to a backdrop of mountains and forests of fig, eucalyptus and sweet chestnut. This is Spain's north-facing coast, the Costa Verde, named for its lush vegetation, since it rains pretty consistently between October and April. In between times, the locals hope the sun shines, because when it does, this is heaven on earth.


It has over 200 beaches nearly all of which are either spectacular and/or delightful. With clear water, pretty little coves nestle under cliffs alternate with long sands over which the surf rolls relentlessly in. It’s reminiscent of Cornwall, until you turn your gaze inland to the mighty backdrop of the 6,000ft Picos de Europa. Even the foothills are dramatic enough.
The Picos, which straddle Asturias, Cantabria to the east and the northern edge of Castilla y Leon, are the reason the Moors never made it into Asturias: the principality is Celtic in heritage and tradition.


So while you can enjoy a glass or two of wine from nearby Rioja, or neighbouring Galicia (the flowery white Alborino in particular slips down beautifully at sundown after a day on the beach), the locals drink cider. Sidrerias – cider houses – are everywhere, serving the local sidra by the bottle, and usually complete with a special machine for pouring it. This cider is flat, like scrumpy, and your glass should only be filled with about an inch of sidra   at a time, poured from a great height in order to aerate the drink and give it a bit of a fizz. Pouring can be done by a skilled waiter – to tell just how skilled, see if he is looking at the target glass while he pours (beginner), or whether he is carrying on his conversation over one shoulder while looking the other way (expert). In many establishments you’ll be treated to this high-pouring floorshow for your first taste and then left with your bottle of cider attached to a little machine which will aerate the drink for you.


Sidrerias tend to be good places to eat too, and to go with your cider, Spanish bread is always good. Rick Stein was spot on about that when he visited the area for his TV show. The seafood is always superb, sparkling fresh from the day’s catch. Particularly worth looking for on the menu are plain steamed mussels (mejillones), grilled razor clams (navajas), large juicy prawns (gambas), and anything to do with crab (centollos, or the little blue crabs called necoras, or the magnificently named buey del mar - the ox of the sea). If you like calamares, try smalled squid grilled whole (chipirones), or the larger cuttlefish (sepia). If you’re keen on whitebait, there are a wealth of small fish available to eat whole such as parrochas – which are more sardine sized) or boquerones (anchovies, often marinated). 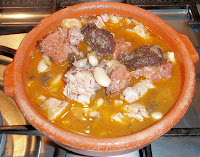 Away from seafood, every establishment serving food will offer fabada Asturiana. For Asturians, this is a thrifty stew of the local beans (fabes, often denoted with the town of origin), flavoured with morcilla (a herby, aromatic half-sibling of black pudding), and ham hock or salted pork belly. The fabada is itself a distant cousin of the cassoulet of south-west France. However, no two fabadas are ever quite the same. Some will contain hunks of breads soaked in the broth, some are distinctly soupy, others more oily. Whichever way, the beans and the liquor should be intensely savoury from the slow-cooked meats and usually from saffron and smoked paprika. Crush the meat pieces into the stew if the dish hasn’t already been served this way and enjoy.
The fabes turn up in other dishes too, such as beans and clams (fabes con almejas), a dish which can be sublimely creamy, flavoursome and delicately aromatic ... or as dull as ditchwater and much the same colour.
Other regional specialities include kid stew (cabrito guisado), and escalopines al Cabrales, where veal is flattened into an escalope, coated in breadcrumbs and served with a sauce made from another great regional speciality, the incredibly stinky Cabrales cheese. Matured in caves, Cabrales should be moist, creamy and very strong-tasting. You will also be able to find it offered dotted on to crisp corn tortillas and drizzled with honey, a powerhouse combo of sweet, and intensely savoury.
Many dishes can be sampled as tapas: look out for chorizo cooked in cider, which is meltingly soft and tangy. Also pulpo - octopus tentacles cooked, sprinkled with paprika and always, always, served with a boiled potato in the middle of the dish to mop up the juices. From neighbouring Galicia come pimientos de Padron, the nuttily bitter little peppers fried in olive oil and sprinkled in salt. Eating Padron peppers is a sort of gastronomic Russian roulette - although generally mild, around one in ten peppers will pack a chilli-hot punch, although on our visit this year, we were regularly assured that all the peppers would be mild. 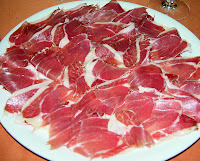 At the more expensive end of the scale is the jamon Iberico, a plate of which will set you back about €12-€15 depending on the establishment (several places will cure their own meats and they are well worth seeking out), but which should be sampled at least once during a visit. Thinly sliced and arranged on a large platter with no further adornment, the wafer-fine slices of cured ham will melt in your mouth, sweet and nutty at the same time.
This isn't haute cuisine: it's hearty, rustic cooking. It's always unapologetically full of flavour, simply cooked and accompanied and it's designed to fill you up. After a bottle of sidra, some jamon, followed by seafood and maybe an Asturian rice pudding to finish, I always feel as though I won't need to eat again for days.
Posted by Christina at 22:26