Signs of spring - the asparagus is up 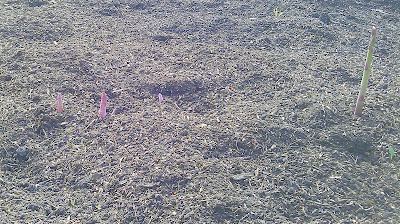 Like the sound of the cuckoo and daffodils coming into flower, the sight of the first asparagus spears poking bravely above ground is a sign that spring is on the way. Every year, I think they're leaving it later and later, but this time, these four spears just managed to get their heads above ground before the end of March, as usual.

We ate the fella on the right (above) before we even left the plot, but experience suggests it will be a good two to three weeks before there's enough for a decent portion and after that we'll be struggling to keep up until June, when we'll stop cutting the spears and leave them to grow into fern. The plants need to rest and replenish themselves to store up nutrients for the next year's crop.