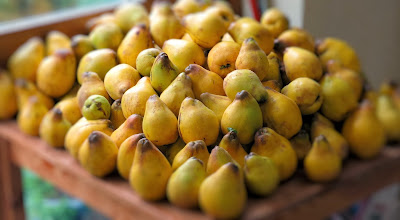 My quince tree is only four years old but has become a much-loved staple of the allotment in that short time. For its delicately beautiful blossom late in spring, and the reliable crop of fruit which turn from green to bright yellow very quickly in October, it's a distinctive and much-commented on tree. Last year, many of the comments centred on the lack of fruit as a very late frost wiped out the blossom and I only had two quinces to pick come the autumn. This year, as if to make up for it, the tree has produced a glut of nearly 200 golden quinces.

When buying the tree, I chose the variety Meeches Prolific for its early cropping and the large size of the fruit. So far, most of the quinces picked weight in at over 300g, and I've had one or two individual fruit over 500g. The other most common variety sold in the UK is Vranja although there are many others if you scour the catalogues.

The good news is that quinces trees are self-fertile, so you only need one tree, and very hardy. In their native middle east they grow on the hills where it is hot and sunny in the day but can get very cold at night. So, while you don't need to worry about frosts, the trees should be planted in a sheltered position to make the most of our summer sun.

Of my 200 quinces this year, about half were given away to friends and family. We made quince jelly at the Secret Garden Club, and guest took away quinces to cook and eat at home. Of the rest, I've made more jelly, and sticky smooth quince cheese with the remaining pulp - see here for the full recipe. There is quince vinegar on the go, and we've had poached quinces, quince tarte tatin, baked quinces, and spiced quinces. One of the points in the quince's favour is how well it lends itself to being preserved - I think we would all be very fed up of quinces by now if we'd had to eat all of them at once. 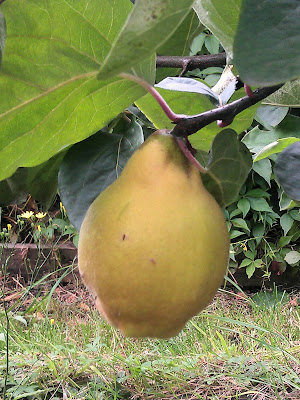 As it is, the quince mountain has been reduced to a small hillock and we still have the quince cheese, jelly and pickled quinces to look forward to. I'm particularly looking forward to the pickled fruit with its clear golden colour and rich spicing.

This is a fairly standard pickled quince recipe. The spicing comes from the recipe in the excellent National Trust book Jams, Preserves and Edible Gifts, and I've added a couple of whole chillies for an extra kick, as well as keeping the ginger slices in the syrup with the quinces.

It's definitely worth using brown sugar for this to help the quinces turn a lovely golden colour.

Sterilise a jar or jars to hold 1.5l and put in the oven at 120 degrees to dry off.
Crush the allspice and peppercorns lightly, then tie these, plus the strips of lemon rind, in a muslin bag. Heat the vinegar and sugar together in a large pan, stirring to dissolve the sugar, then bringing to the boil. Meanwhile peel, core and quarter the quinces. If the quinces are very big, you could slice the quarters again. Toss the slices in the lemon juice to stop them discolouring, and when the vinegar and sugar syrup has been simmering for 5 minutes, add the quinces and lemon juice to the pan. 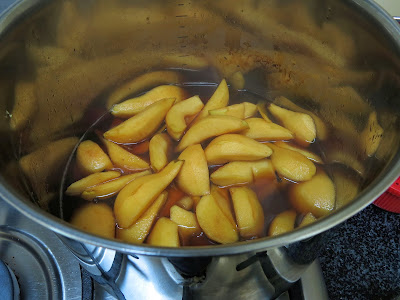 Add the spices in muslin, plus the cloves, ginger slices, cinnamon stick, and chillies, and bring back to the boil. Simmer for about 20 minutes, when the quince slices should have softened.
Take off the heat and remove the muslin bag. Ladle the quinces, ginger slices, cloves, chillies and cinnamon stick into the jar or jars, and pour the remaining syrup over them. Seal and cover the jars and leaves to cool before labelling and storing in a cool, dark place. 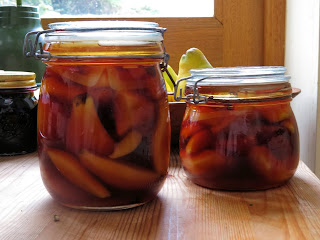 Poached quinces
This is a very easy way to enjoy the delicate, perfumed taste of quinces, but what I found especially interesting this year was how the nicest poached quinces were the ones made to the simplest recipe. I started off with poaching the fruits in vermouth, with vanilla and sugar added, and while they were nice enough, I think the flavour of the fruit was somewhat overpowered by the alcohol.

So the next time, I made up a syrup simply of water and sugar and popped in half a vanilla pod. (It was a toss-up between the vanilla pod and a star anise, and the pod won because I really wanted the quince flavour to come into its own rather than being overshadowed by the anise.)

Put the water and sugar into a large pan, and set on a low to medium heat. Stir to dissolve the sugar then raise the heat and bring to the boil. Lower the heat again to a simmer and add the lemon juice and vanilla pod.
Meanwhile, peel the quinces, cut into quarters and remove the cores, then slice each quarter lengthways again - so that you end up with eighths. Add them to the pan as you cut them, so that they don't discolour.
Turn the heat down very low, so that the syrup just bubbles. Cover the pan, and let the quince simmer gently until soft - about 20-30 minutes. Remove from the heat and leave the quince slices in the syrup to cool.
Spoon the quince on to a plate, add a little syrup and serve with creme fraiche or ice cream.