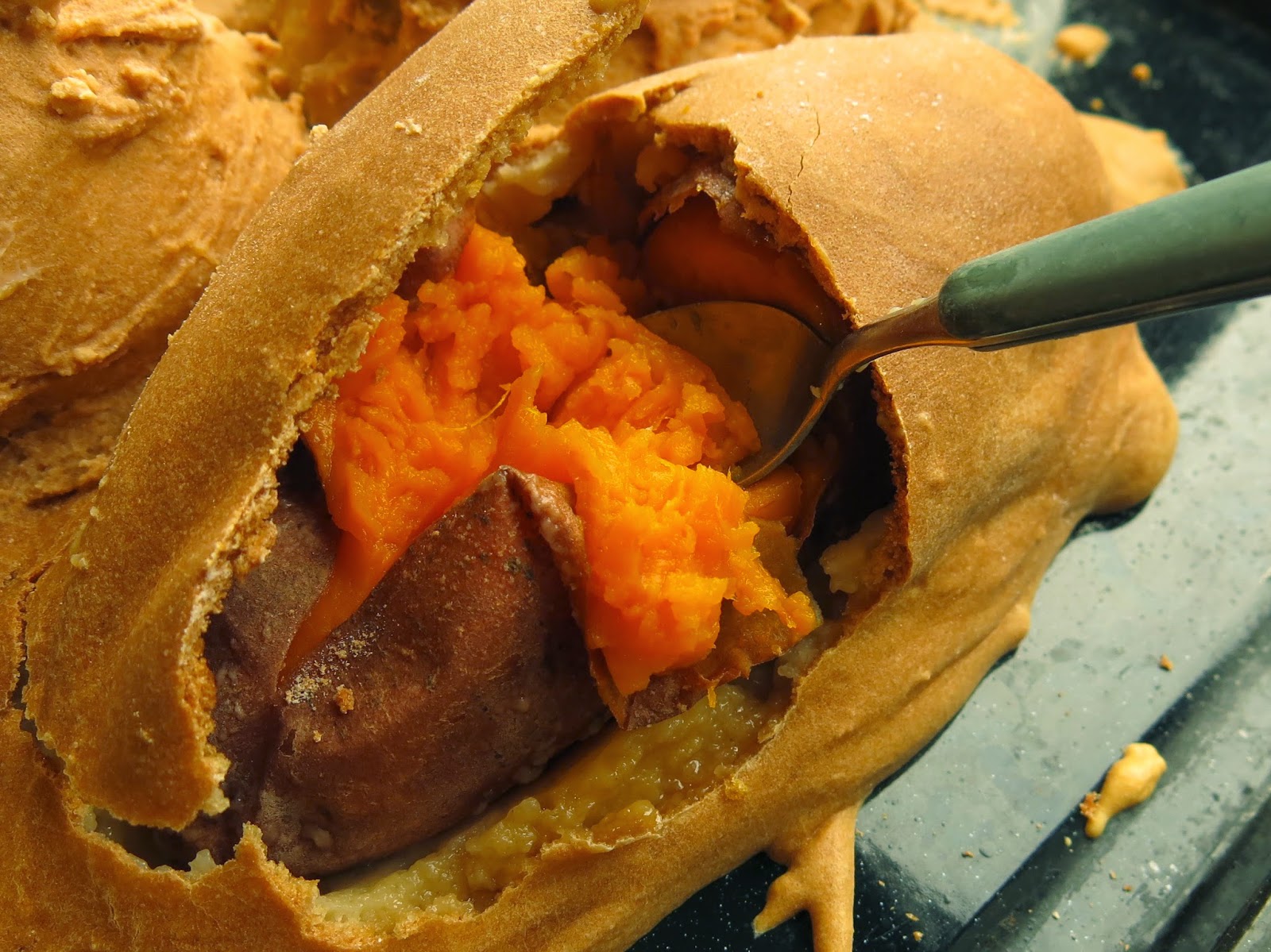 I'm mulling over whether to grow sweet potatoes again this year. On the plus side, they were less trouble than I'd anticipated, growing happily under a fleece cloche for most of the summer, even when I forgot to water them quite as regularly as they might have liked. On the minus side, the fleece cloche proved not very durable and were I to grow enough sweet potatoes for more than a few portions, they would take up a lot of space. I'm also wary that they grew well because we had a decent summer; in a more normal, cooler growing season, would it all be worth it?

I think I've decided to give it a go again thanks to a startlingly good salt-baked sweet potato I enjoyed the other day. I first encountered baking in salt with Anna Colquhoun and Mia Christiansen and their salt-baked celeriac.

That celeriac was a revelation: baked whole in a salt paste, the flesh was soft enough to be eaten with a spoon, with an intensely sweet celeriac flavour, salt-spiked at the edges near the skin. It's a bit of show-stopper of a dish: brought to the table still in its salt case and cracked open in front of the diners.

I wondered what other root vegetables might also taste good baked this way and after a bit of trial and error, found that sweet potato is exquisite when cooked in salt: the inherent sweetness of the potato is concentrated and the texture, after three hours in a low oven, is pillowy soft and fluffy.

I had good results with beetroot, too, especially the golden beetroot which are a staple of my allotment, but to get really soft and yielding flesh, it really needs to spend up to four hours in the
oven. Sweet potato gives you a quicker return for your effort.

The trick is to ensure that the salt paste covers the potato completely: no gaps or holes. The paste needs to be made thick enough to hold its shape so that it doesn't all slump to the bottom of the dish as soon as you put it into the oven, but not so hard as to be un-malleable. As the sweet potato cooks, so the paste will harden into a rigid casing.

Scrub the sweet potato and dry the skin. Place it on a baking tray and pre-heat the oven to 150 degrees C.

Mix the salt and flour in a bowl and add the egg whites in the middle. Begin to beat together, adding the water a little at a time - you may not need it all. Stop when it's like wet Play-Doh - not thin enough to pour and not too thick to spread with a spatula.

Spread the salt mixture over the sweet potato, making sure the whole of the root is covered. Ensure there is salt paste around the base of the potato, so there are no gaps between the potato and the baking tray.

Put into the middle of the oven and bake for 3 hours. The salt paste will harden and turn brown as it bakes. When you remove it after 3 hours, it should be hard to the touch. Cut the top open with a knife, peel back the skin of the sweet potato and spoon out the flesh to eat. 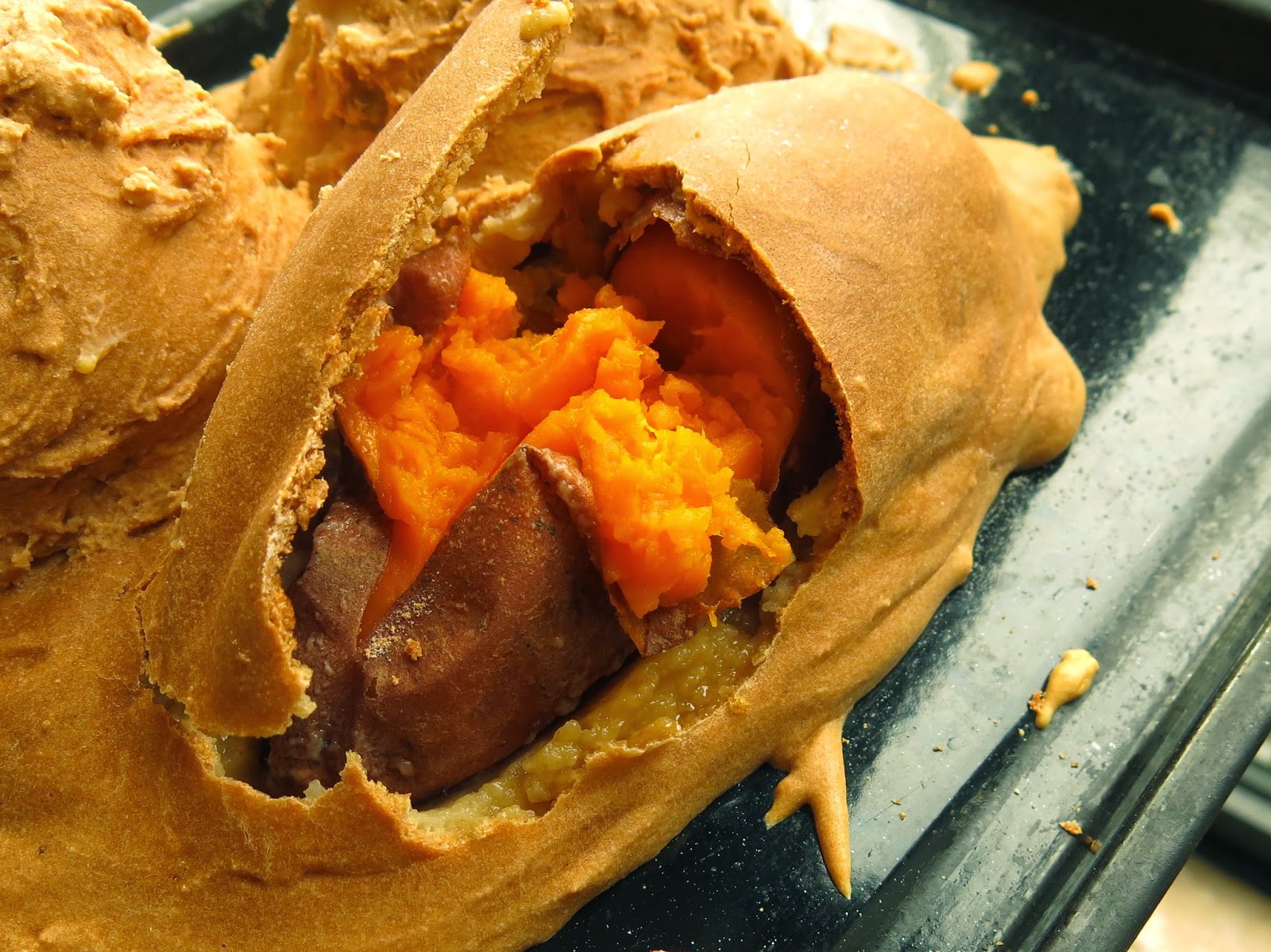