Things to do with quinces when you have an almighty glut

This year the quince tree lived up to its name of Meech's Prolific and produced over 300 fruit. After distributing just over half of them to friends and neighbours, I started reducing 150 quinces into goodies for the preserves and drinks cupboard. Over the next couple of months, it became something of a challenge to see how many different ways I could use the fruits.

You cannot eat a quince raw: it's as hard as a cricket ball and probably about as tasty. But cooked, gently in syrup, or wine, or roasted long and slow in the oven, it quickly softens. With the addition of sugar becomes meltingly sweet, with a flavour something like a floral apple with a hint of apricot. Cooking with sugar also transforms the colour of the flesh from creamy ivory to warm pink, then amber, and finally, if cooked for long enough, russet red.

In the picture above, the quincely foodstuffs are as follows, from left to right: 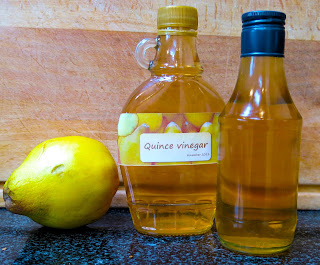