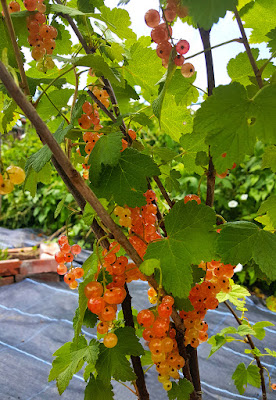 I found these plants looking rather sad and forgotten at the back of an end of season sale bay in a Crews Hill garden centre. Alongside leftover hebes and apple standards with crooked stems were three bare-stemmed plants with 'Pink Currants RosaSport' on the label, £3.00 each.

I wasn't sure how serendipitous a find this was. We have a blackcurrant glut every year and two new redcurrant bushes thanks to cuttings a fellow allotmenteer gave me. But I was planning a soft fruit area on the new allotment and so far only had the redcurrants and some rather feral raspberry canes to go in there. The picture on the label was pretty, showing plants abundant with coral-coloured sprays of fruit, and clearly no-one else was going to buy them.

Pink currants are a redcurrant variant, ripening to a flushed salmon-pink in early July. They can be grown just as black- or redcurrants: best in free-draining soils and in a position where they can get a little afternoon shade. Having said that, my blackcurrants are established in the wettest part of my allotment and they don't seem to mind. I built some free-standing brick raised beds for the pink currants to help with the drainage. I also made sure to weed the raised beds properly: the blackcurrants do get a bit overrun each year by bindweed, however diligently I try to dig it out around the roots.

The pink currants came in containers so I removed them, watered well and teased out the roots, before planting them in a hole slightly bigger than the pot. I back-filled with compost, adding another layer as mulch once the plants were in situ and firmed the top. Having watered them in well, I left them alone to settle in.

They fruited just four months later (they must have been in those pots for a while ...). Not a huge crop, but enough to promise much more in succeeding year. The fruit look like little pink pearls, with a fresh, almost floral flavour. Certainly not as strong as blackcurrants or as sweet/sharp as redcurrants. Currants are easy and rewarding to turn into jelly, but until I get an overwhelming glut of these I'll be content to stick with eating them fresh from the plant. Those that did make it home were scattered over fruit salads, used to top breakfast cereal and porridge, and, most successfully, folded into an Eton Mess with a few raspberries, happily also ripe at the same time - see below.