Tangled up in blue 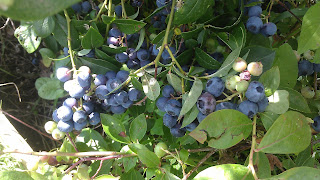 Not all the plants have suffered in the cool, wet and windy conditions that prevailed here in the south of England for much of the spring and early summer. The blueberry plants, snug in their sunken pots of ericaceous compost, loved the daily soakings and produced a massive glut of fat indigo berries.

Blueberries need an acid soil (lower than pH5.5) and London clay on its own isn't nearly acid enough. So each plant occupies its own 35cm pot, and each pot is sunk into the soil so that the tops are at ground level. Sinking the pots reduces water loss, which is helpful since blueberries also like plenty of water. A yearly topping up of ericaceous (acidic) compost keeps them fed, and I also spread the shredded needles Christmas tree around the foot of the plants as a mulch in January.

This year, seven blueberry plants have produced around 6kg of fruit so far. I'm still picking enough each day to sprinkle over breakfast cereal. 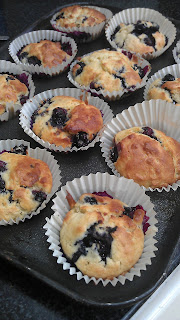 But what to do with the rest of them? Blueberry muffins was an obvious choice since the homemade variety is invariably so superior to anything shop-bought. I used Nigella's recipe from How To Be A Domestic Goddess, also reproduced here: http://www.mumsnet.com/Recipes/i/1203-Blueberry-muffins.

But blueberry muffins will only make a small dent in the glut. In the past, I've made a blueberry tart with a blueberry-flavoured custard topped with the fruit, but the custard always cooks to a brown colour instead of mauve or deep purple - it's the blue of the blueberries mixed with the orange egg yolk. It's a real 1970s wallpaper brown and doesn't look very appetising. So this time, I went for a more conventional vanilla custard underneath the blueberries.

I wanted this to look like something you might buy in a French patisserie, and knowing my limitations, used a bought ready-made sweet pastry case.

Heat the oven to 190 degrees. Take the pastry case out of its wrapping and place on a baking tray. Beat the egg yolks, cream and sugar together until smooth. Add the vanilla extract to taste and whisk well in.

Pour the custard into the pastry case and bake in the oven until set - about 25 minutes. Leave to coll, then spread a thin layer of blueberry jam (see below) evenly over the custard. Stud the top of the tart with raw blueberries - the jam helps to stick them to the top of the tart but isn't essential. Dust with icing sugar to finish off. 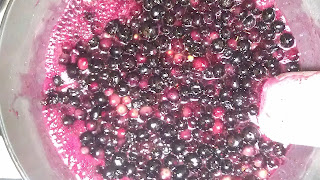 For the first batch of jam, I followed the recipe from the National Trust's Jams, Preserves and Edible Gifts. This calls for 850g sugar to 900g blueberries and was far too sweet for my taste.

For the next batch, I reduced the sugar and used 350g ordinary granulated sugar and 250g jam sugar. I also had 300g blackcurrants left over from harvesting the blackcurrant bushes and added these too for extra bite.

I left the blueberries to steep in the ordinary sugar, lemon juice (one lemon's worth) and a pinch of salt overnight. The following day I added the jam sugar, and boiled it up - it reached setting point in about 10-15 minutes.

Blueberries in kirsch
An incredibly simple recipe from Preserve, published by Hamlyn. For every 175g blueberries, use 50g caster sugar and 100ml of kirsch. Layer the blueberries and sugar in a sterilised jar, add the kirsch and seal. 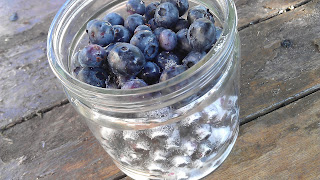 Shake the jar every day until the sugar is dissolved then leave in the dark, unopened, until you want to use the blueberries. 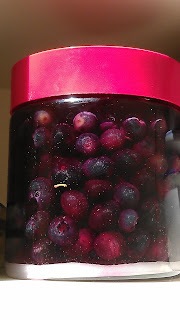