I was given some physalis seeds at the beginning of the year. Physalis is one of those fruits I buy occasionally and then never know what to do with them. They look little a small orange tomato, wrapped in a papery case, and I find it very hard to describe the taste - sweet and fruity with a tart note is about as much as I can manage. I didn't feel they would be very appetising cooked. I also wasn't sure why I might want them: physalis plants spring up self-seeded every year, germinating from the kitchen compost.

So we buy them occasionally from the supermarket and snack on them. A few overripe ones get thrown in the compost and it is presumably these whose seeds germinate later on the allotment - often intermingled with some enterprising tomato plants which self-seed the same way. These 'volunteer' plants never seem to set fruit (the self-seeded tomatoes never seem to get blight, either).

Physalis are related - fairly closely - to tomatillos, and also to tomatoes and aubergines. They're part of the botancial family Solanaceae. Solanaceae is the nightshade family, but don't let that put you off. They're also known as Cape Gooseberries, groundcherries, Chinese Lanterns (usually the more non-edible varieties, grown for the lantern-like seed cases) and improbably enough, golden strawberries.

The one you'll most often see in British gardens is Physalis alkekengi, which is hardy in winter and bears the bright orangey-red lanterns.

The name Cape Gooseberry is often associated with the edible plant, Physalis peruviana - the 'cape' in this instance isn't a geographical cape harking back to the plant's origin, but the item of clothing, referring to the case which covers the fruit. They grow in sub-tropical and temperate climes, and, I have discovered this year, in a cold wet summer in London. I thought it might be interesting to grow some physalis on purpose and see just how many fruit we could raise. We were also growing tomatillos at the Secret Garden Club and I wanted to make a comparison between two such close relatives. 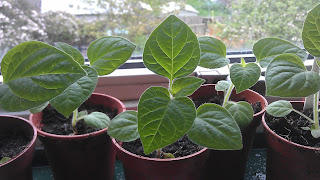 I treated the physalis seeds as if they were tomatoes or aubergines: sowing them (a bit late) at the beginning of March, two to a small pot under a cloche, and leaving them to germinate indoors in warmth. The seedlings were up two weeks later, and grew quickly in their pots, uncovered, on a sunny windowsill - see above.

The fruit starts developing inside the green cases in July/August. If you gently squish the green teardrop-shaped lanterns between your thumb and forefinger you can feel the fruit, at first just the size of a pea, then growing bigger and bigger. Unlike the tomatillo, they don't split the casing, but when the husk turns brown from green, the fruit inside is ripe.

Trying out the first ripe fruits, the taste was a revelation. Having never eaten a physalis that hadn't spent most of its days in a supermarket before, I was unprepared for any complexity or depth of flavour. But that ill-defined fruity-and-a-bit-tart is so much rounder and syrupy - and yet still with a threat of tartness. Now I can see why you might want to make jams or jellies (and definitely a pavlova) from them. If all physalis tasted like this, we'd do so, so much more with them.