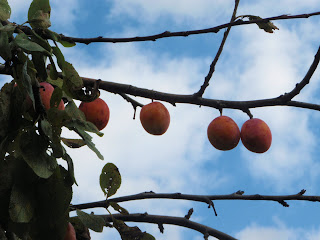 With autumn bringing a bracing chill to the air even on sunny days, and even colder nights, it's time to accept that the summer crops are over. Whatever fruit they have produced, they won't be producing much more.

With that in mind, it's time to finish up the remains of some vegetables, and to deal with the gluts in other areas. This year, I've been making lots of simple pickles, experimenting with different flavoured vinegars and aromatics to give the preserved veg a bit of extra zing. Earlier this year I discovered using apple vinegar, thanks to Mia Christiansen and Anna Colquhoun, at their Nordic Cooking Class, and I've used this successfully as the base for pickled quinces and pears, and also pickled beetroot. Last year, I pickled beetroot in horseradish vinegar and while it was delicious, it was also hot enough to blast us from one end of the room to another. Apple vinegar - or cider vinegar, they're the same thing - has made a much softer, more rounded flavour to the pickle.

The beetroot are small, no more than the size of a ping ping ball, because the beets that go in the autumn pickle are the leftovers from the summer crop, the ones that for whatever reason, never really swelled and made it - too many of them the yellow Touchstone Gold variety this year as well. They're small enough to be pickled whole. 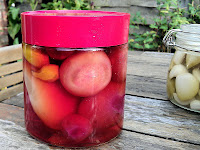 
Clean the beets and place in a large pan. Cover with cold water, bring to the boil and simmer until just cooked. Much depends on size, but ping pong ball sized beets should be ready after 20 minutes.

Drain and let the beets cool. Meanwhile sterilise a jar into which the beets will fit snugly.

When the beetroot is cool, slip off the skins and trim the root and stem. Pack the jar with the beetroot and aromatics.

In another jar, add 10g salt to every 400ml apple vinegar. Put the lid on and shake the jar vigorously to dissolve the salt. When ready, pour the vinegar/salt solution over the beets so that they are covered. Seal and store in the fridge.

Aside from the question of whether to cook the vegetables or not, the pickling method stays mch the same whatever you are pickling: bring vinegar, salt, and also sometimes sugar, plus herbs and spices to the boil. My husband can't tolerate the smell of boiling vinegar in the house, so I, a) wait until he's out for the day before doing any pickling, and b) heat the vinegar, salt and sugar up in the microwave, as it seems to contain the smell a bit better than on the open hob.

Pack a sterilised jar full of your chosen vegetables, then pour the hot vinegar solution over them. Seal the jar, let it cool down then store in a cool place.

I took much the same route with elephant garlic. These crop produced 4-5 mature bulbs, each with 7-8 mighty cloves; I think  the rest of the plants must have got waterlogged this year. After roasting one whole bulb to mash and serve alongside a Sunday roast, I was left with just enough elephant garlic to pack a 500ml Kilner jar. 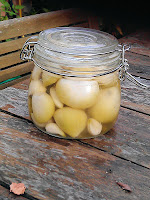 Have a sterilised jar ready. Peel the garlic cloves, leaving them whole.

Place the vinegar, water, salt, sugar and any aromatics in a large pan and bring to the boil. Simmer for five minutes then add the cloves. Bring back to the boil and simmer on for another five minutes. You can do this in the microwave if yours has a good simmer function.

Pour everything into the sterilised jar and seal. 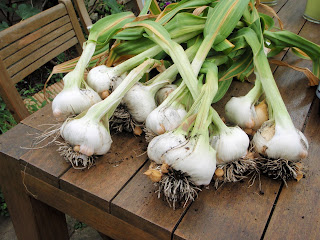 If the elephant garlic has been disappointing this year, like so many other crops, it's also worth noting the successes. I have a very old plum tree - I say very old, but I've no idea exactly how old it is, as I inherited it from the previous allotment holder. Its branches are covered in lichen, and there is no sign of a graft at the base of the trunk so I assume it is self-seeded, or planted before grafting became the norm? 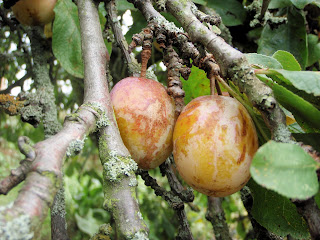 Thanks to this blog, The Garden Diaries, I think I have identified the variety as a Warwickshire Drooper. Certainly the tree has a somewhat weeping habit, and the plums themselves are yellow, blushed pink where they are exposed to the sun, and also sometimes with a slightly mottled look to them - they are not smooth and supermodel glossy. 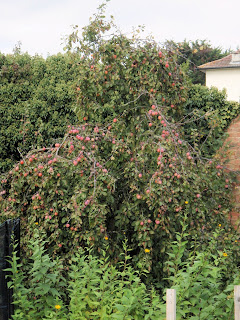 The tree is mainly notable for its prolific consistency. Since I started work on this particular allotment nine years ago it has produced an astonishingly large number of plums every single year - and this year it has surpassed itself. Every single branch is laden with fruit. I simply cannot cope with all these plums, and in addition to sheer numbers, this year the fruit has been entirely free of plum sawfly larvae. Most years, despite the greaseband around the trunk and despite the fly trap hung among the branches, a few get through and worm their way into the fruit. This year, none at all.

So, we eat plums straight from the tree. I've made plum crumble and an approximation of Chinese plum sauce. And every year I make up a big jar or two of pickled plums and we eat our way through them over the course of the following year. Tart and fruity and fragrant all at the same time, they go brilliantly with pork, with duck and game, with cheese, and perhaps a bit more surprisingly, they are fantastic with Thai fishcakes.

Put the vinegar, salt, sugar and aromatics into a pan and bring to the boil, making sure all the sugar has dissolved.

While the vinegar is heating, wash the plums, halve them and remove the stones. Pack the plums into 2 x 1 litre Kilner jars, which have been sterilised (40 halves per jar).

Once the vinegar mixture reaches boiling point, take it off the heat and pour over the plums, making sure that each jar gets an equal number of star anises, chillies, cloves, etc. (You could scoop out the aromatics before they boil and add them to the jars when they are about halfway full of plums.) Seal the jars and let them cool down at room temperature before transferring to the fridge.

These pickled plums last about 3-4 months (less if they were pretty ripe when picked) before going a bit slushy and syrupy. 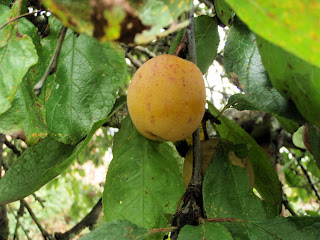