I am regularly asked what vegetable I would recommend growing to someone who is just starting a kitchen garden. I'm sure they expect me to say potatoes, or radishes, or runner beans. Usually I suggest Jerusalem artichokes. They are in so many ways the perfect vegetable. (And in one crucial respect, not so perfect.)

They are virtually indestructible. Apart from a little slug damage when the new shoots appear in April, they appear to attract no pests.

They are perennial so they come back year after year. You'll get bigger and better tubers if you dig up the remaining artichokes in spring and replant just the biggest ones, but it makes them very economical; buy once, replant infinitely.

You can grow them in the same spot each year. You don't have to integrate them into a rotation plan and prepare a bed for them every year.

The tubers can be harvested from autumn throughout the winter into early spring, so a long-lived crop and one that is producing for you at a time of year when little else is growing. 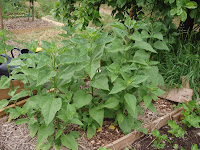 The plants are tall and if you choose the position of your Jerusalem artichoke bed with care, they can act as a windbreak for more tender crops.

The artichokes are highly versatile in the kitchen. You can roast them under a Sunday joint like potatoes, or roast along with other rot vegetables. They make a delicious gratin Dauphinoise, substituting thinly sliced artichokes for the potatoes. You can make Jerusalem artichoke fritters, you can mash them, you can eat them raw, shaved thinly into salads. They make a beautiful creamy puree that can be used as a base for soups.

But they do divide people. I think you either love them or loathe them. And whichever side you're on, you can't deny the one thing that puts many people off Jerusalem artichokes. They make you fart. Each tuber, whether raw or cooked (and funnily enough, I think the effects are less explosive after eating raw artichokes) contains a carbohydrate called inulin, which gives you wind. Not for nothing are they usually known as 'fartichokes' in the Zia maison.

So while I have no inhibitions about serving Jerusalem artichokes to supper guests - after all, they will leave at the end of the evening and do their farting in the comfort of their own home (and so will you) - I would advise not serving them at the starting of a camping weekend, say.

Not to be confused with ...
Globe artichokes

Unrelated botanically to either Jerusalem or globe artichokes, the Chinese artichoke, or Stachys affinis, looks like a smaller, skinnier, paler version of a Jerusalem artichoke tuber. Actually, I think they look like fat cartoon caterpillars, but don't let that put you off.

Like Jerusalem artichokes, the tubers can be planted in spring. They are then harvested from late summer onwards, and again, keep some healthy tubers aside at the end of the season for replanting for the next year's crop.

The taste of these is not dissimilar to Jerusalem artichoke and they can be cooked the same way or in stir-fries, or served raw like a salad vegetable.

Preheat the oven to 180 degrees C.

Have a large bowl of cold water mixed with a little lemon juice standing by you. Scrub the Jerusalem artichokes and peel them, putting each artichoke  in the bowl of water once peeled to stop them from going brown.

Then slice the artichokes into rounds as finely as possible. Arrange the slices neatly and evenly in layers in a shallow gratin dish. After each layer, season with a little salt and pepper and a smear of butter.

Once you’ve placed the final layer of artichoke slices, sprinkle with the chopped parsley, then pour over the cream. Top with a knob of butter and a last pinch of salt and pepper.

Cover the dish with foil and bake in the oven for 20 mins. Remove the foil and put back the in oven uncovered for another 10-15 mins to brown the top. Drizzle over a little walnut oil when you serve.